Steven Jennings- Under 6’s and Under 15’s Coach

Steven Jenning- Under 6 mini’s and Under 15’s Coach 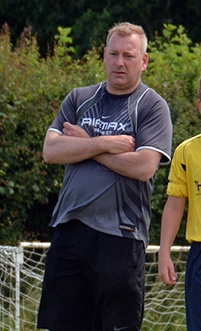 I attended the first meeting when the club was formed at the Red Lion all those years ago as my daughter was at Cringleford School and I played 5 aside with Dave Shared. My daughter was not that interested but later my son Will came along and I started coaching his age group. Since then I have completed my level 2, Youth Modules 1 – 2 and Futsal level 1 FA coaching badges.  I have now been coaching for 8 years and moved my team from the South Norfolk League to NYC A league with back to back promotions. We were the first Cringleford team to play in the top league in Norfolk. I have strong beliefs on playing from the back and through the thirds. I believe all training should be done with a ball and the game is a great teacher. I have fallen in love with beautiful game all over again and I am never happier being over the park coaching.